“Sometimes when I look at you, I feel like I’m gazing at a distant star. It’s dazzling, but the light is from tens of thousands of years ago.”

With ‘South of the Border, West of the Sun’, Murakami creates a tangible reality in the realm of fiction, vividly drawing parallels between the deceptively simple and happy, yet mundane lifestyle, with the absolute havoc of the mind and conscience.

The plot revolves around the life of Hajime, whom we follow from an early adolescence, through his textbook editing days and right into his thirties, drawing an arc of failed relationships that start and end with Shimamoto, his childhood muse, who he runs into after two decades since they last met. Shimamoto, with her mysterious aura, puts him in a rashly conjured readiness of throwing away his family, his business and all he had ever known.

The author spins a very abstract dreamscape piece of fiction with undefined elements of love, loss and uncertainty, enveloped in the blanket ambiguity,which plays a major role in the storyline, almost as if the storyline itself isn’t important, but the feelings and the emotions involved are. The ambiguity works both ways. For some, it might be an unwelcomed cliff-hanger while for the others, it might allow one to adopt, interpret and connect with the storyline in one’s own way, drawing connections from one’s own life that a reader may catch if he reads between those lines. However, many a reader might not be willing to do the same.

The book is more like a written equivalent of an abstract painting, where the reader would often hunt for details that were never revealed, to the extent, one might even eventually give up on the storyline and not care. For instance, who was Shimamoto now, after all these years? Where did she come from? Where did she go?

The book is beautifully written, and with all that vivid imagery, I was left longing for more.

A city of dreams. A city that never sleeps. Its soul rises from the lucid dream lit by sodium streetlights into the smog of dawn. Within a few hours, the city’s mirage seekers move from households with sirening cookers into a traffic broiler in their swanky cars, those Kaali Peeli taxis or the massive overpacked BEST buses that come with constant reminders to “Pudhe chala”; the exhaust spewing and shimmying upwards as they mechanically tune to the channel broadcasting fitness advice they’ll never follow. Some use the local trains. Push and pull, “kidhar utarna hai”, and bulldozing into the crowd with your body weight to get in or out sounds like the quintessential ‘Common Man of Mumbai’ workout. A city where there isn’t a method to the madness, but madness is essentially the method itself.

But amidst patient negotiation through the chaos, one discovers the true nature of the island city.

A city survived by yin and yangs in all walks of life- where the intense mayhem is swiftly navigated by the Dabbawallas, an age old nearly errorless system of the delivery of home cooked wholesome meals to many a breadwinner. Where the Colonial-Saracenic Taj Mahal Palace Hotel and The Gateway of India- a scene that every Bollywood enthusiast is familiar with, boasts of a coastal view of the modern era of skyscrapers and opportunity. Where a commuter in the incessant rainfall finds a peaceful moment in a glass of masala infused cutting chai and Vada pav. Where a struggling actor looks at the celebrity in that magazine cut out and finds hope in the idea of “One day”.

It is Bombay that Krishna could have been describing in the Tenth Canto of Bhagavad Gita.

‘I am all destroying death

And the origin of things that are yet to be…

I am the gambling of rogues;

The splendour of the splendid’

This golden bird of a city feeds its people their hopes, dreams and aspirations, and dare to follow them, ploughing through the intense competition and uncertainty, shrugging and moving on from many a tragedy that come visiting.

And in this nest of uncertainty, we Mumbaikars place our faith in The Supreme Souls of Siddhivinayak Mandir, Haji Ali and the many other deities guarding this mixing pot of innumerable cultures. Because this bird expands its wings, welcoming everyone into its nest, imparting each missionary a piece of itself-whether he’s a resident of the exclusive Malabar Hill or from the maze-like alleys of Dharavi, whether he bargains in the local Macchi market or for that Prada rip-off on Linking Road; or showers the much coveted Rupiya on the even more coveted Prada. Whether it’s that barber sets shop on the footpath or the silver spooned child in a school uniform that walks on it. Whether it’s a maid, a driver, a cabbie, a teacher, a sweeper. Mother. CEO. Topper. Failure. Dreaming on, ploughing on with hard work and jugaad, as this bird sings on,
“Ae Dil Hai Mushkil Jeena Yahaan, Zara Hatke, Zara Bachke, Ye Hai Bombay Meri Jaan”

Captivated by Dan Brown’s thought provoking ‘Inferno’ and ‘The Da Vinci Code’ ; even the character of Harvard professor Robert Langdon (I like to think of myself as a Langdon lass), Origin attracted an impatient wait. It is Brown’s fifth book of the Langdon series, who reaches the ultramodern Guggenheim museum in Bilbao, Spain to witness the unveiling of a discovery made by former student and futurist Edmond Kirsch that “would change the face of science forever” and answer the questions-” Where do we come from? Where are we going?”. However, the meticulously planned seminar turned into utter chaos when Kirsch gets shot in the head during the reveal. Langdon, along with Ambra Vidal, the future queen of Spain and “beauty with brains” of this book, take it upon themselves to complete Kirsch’s unfinished task.

From William Blake’s poetry, Miro’s paintings and dodging bullets at the Sagrada Familia, to the rise of fascism in Spain and questioning religious faiths, the book has all the Brownian elements. But did it all result in the magical Brownian concoction? I think not.

The story begins and moves at a bullock cart’s pace, through a maze of art and culture references drafted like Wikipedia pages. To be brutally honest, you’d lose nothing by skipping a page or two. Or even a chapter. Langdon’s character somehow fails to impart that ”quintessentially Langdon” edge to the story, making him entirely replaceable in the plot. For instance, anyone into rainy day puzzles could look for that particular line of poetry by William Blake.

Brown does what he does best-cook up a suspense that will make your insides squirm, yet the final reveal merely lives up to the excitement of listening to a monotonous Ted talk. Let’s say Brown came up with nothing “earth shattering”. In fact, it was rather “eyeroll” worthy.

Of course, Brown’s books have always been nothing short of an eye opener when it comes to art, culture and literature, and Origin too offers a fair share of ‘did you know?’s. I wouldn’t count this book as Brown’s top, but I did learn this- it might just be possible to live in a museum in Casa Mila. It’s on my bucket list now. 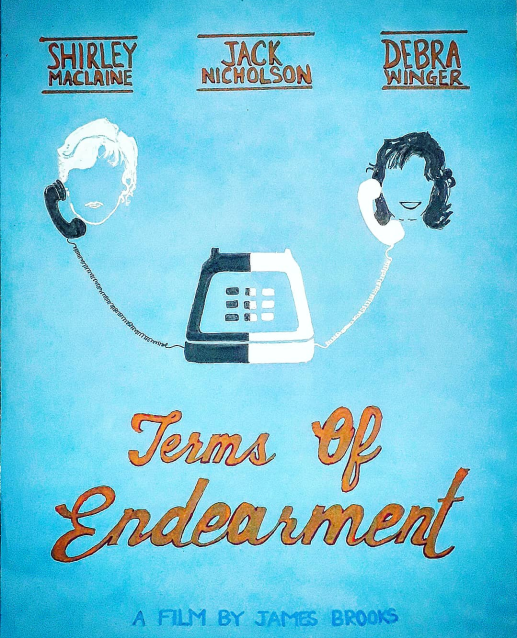 Terms of Endearment(1983) is a film that formulates into a beautiful broth of emotions that shape the relationship of a mother with her daughter. This thirty-five year old classic tells tales of a woman in her fifties-seemingly poised but equally anxious, who allows herself to fall in love, and a troubled marriage of her daughter and a college professor. Seasoned with bittersweet melodrama and offbeat comedy, this movie of surprises and unexpected turns are sure to make you shed some tears.

The opening scene introduces us to an anxious Aurora Greenway played by Shirley MacLaine, who is discovered to be a stylish, but stern woman. Her life revolves around her daughter Emma (Debra Winger), over whom she frets at every stage of life- from infancy -where she’d wake Emma up, fearing death in the crib, all through her ’’Be home by eleven o’clock’’ adolescence and much beyond her marriage to English teacher Flap Horton(Jeff Daniels) that took place regardless of her prophecy of a failed relationship.

Aurora, adamantly single despite many admirers, finds herself falling for her astronaut turned playboy neighbour Garrett Breedlove(Jack Nicholson) who is capable of turning any pleasant meeting disastrously obscene with absolute hilarity-be it a chat by the fence or a lunch date. Meanwhile Emma finds her mother’s prediction of a rocky marriage turning out to be true when Flap has an affair with a college student and she with a banker. The movie then takes an unexpected and heartbreaking turn, showcasing scenarios that are as raw as life itself.

Shirley Maclaine is a brilliant actress. Embodying Aurora Greenway to perfection, she will intimidate you with her raised eyebrows, surprise you with her shy giggles and even scare you with that tight-lipped locked jaw. Debra Winger breathes life into the simple character of Emma Horton. She elevates Emma from just a character in the movie to someone we can all relate to. The two actresses make up the perfect pair together-MacLaine personifying the yin of Aurora’s ego stiffened demeanor and Winger the yang of whimsical Emma.

And now for my absolute favourite- Jack Nicholson. He takes on the character of a garish philanderer and yet his way with words will leave you just as smitten as Aurora was when he said,’’ I’ll tell you, Aurora. I don’t know what it is about you, but you do bring out the devil in me.’’

Jeff Daniels plays Emma’s husband and although his character does impart some comic relief ,his role fails to get the attention of the audience as a supporting actor, as opposed to Nicholson.

Though, the film takes up a slow pace in the second half, a viewer from this generation will find a refreshingly simple form of cinematography and music – uncomplicated camera angles, a lone soundtrack for the entire film that barely merges with dialogue delivery ,”realist” style of scriptwriting and seemingly effortless acting make this film a well deserving Academy award and Golden Globe winner.